A visual guide to food waste and losses (The Guardian)

The Guardian, a British daily, publishes “Produced but never eaten: a visual guide to food waste” which is a global analysis of the food waste (“intentional”), but also of losses which are uninentional.

“Each year 1.3bn tonnes of food, about a third of all that is produced, is wasted.”

“In developing countries there are high levels of what is known as “food loss”, which is unintentional wastage, often due to poor equipment, transportation and infrastructure. In wealthy countries, there are low levels of unintentional losses but high levels of “food waste”, which involves food being thrown away by consumers because they have purchased too much, or by retailers who reject food because of exacting aesthetic standards.”

The article of The Guardian is very visual. That’s the most interesting part. 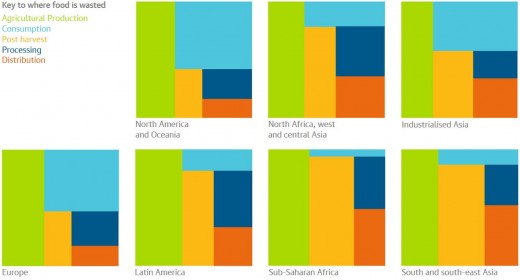 Nevertheless, in order to fully understand what’s at stake, it would be useful to read “Cutting food waste to feed the world“, an article by FAO of 2011. Here, it can be seen that the food waste challenge is more complex than the simplistic accusation of guilt which is commonly provided by the medias.