To smile and think: “Salt, Vinegar, and Glyphosate”

A “homemade” herbicide recipe is floating around the web : salt, vinegar and dish soap. Many of you have probably seen it posted to Facebook or Twitter or Pinterest, or on your favorite home gardening site. Is it efficient, safe and cheap? That is the question Control Freaks, a Weed Science blog which is linked to USDA, answers to in “Salt, Vinegar, and Glyphosate”
A funny and well-documented story which is worth reading.

Effectiveness
Homemade herbicide is efficient on annual weeds. But for perennials, glyphosate is paramount.

Cost
Glyphosate is clearly “less expensive than the homemade mixture on a per-gallon, ready-to-spray basis”.

Maybe you’re not worried about the safety aspect; you simply don’t want to purchase Roundup because you dislike Monsanto. Well, don’t forget that vinegar is often made from corn, and most corn in the US has the Roundup Ready trait (which was developed by Monsanto). So the vinegar you are using to spray your weeds is probably made from corn that was sprayed with glyphosate: the very herbicide you were trying to avoid.
All joking aside, the important thing to keep in mind is that both the homemade vinegar + salt mixture and Roundup are pretty darn safe when used properly, they’re both relatively inexpensive, and both can provide effective weed control in the appropriate situation. Now, all this discussion has made me hungry for some Roundup Ready sweet corn, with just a little salt, and a salad with a nice vinaigrette dressing.”
Bon appétit! 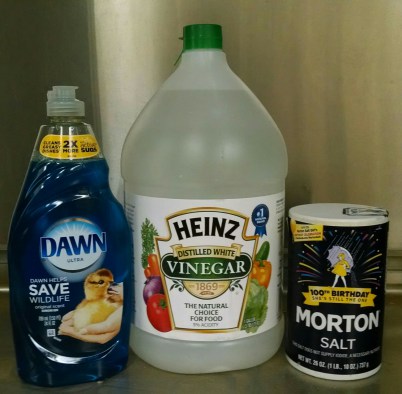