In “Myth busting: Are synthetic pesticides, used with some GMOs, more dangerous than natural ones?“, on  Genetic Literacy, L Katiraee reminds us the Bruce Ames works in a clear and interesting way.

“Plants and animals have evolved mechanisms to fight against their predators. Some of them are mechanical, like thorns or spines on a puffer fish, but some are chemical in nature. As a result, our food is full of natural pesticides and toxins.
One of the more common natural pesticides that we ingest is solanine” (especially in potatoes).
In general, it’s safe. “But when the potato starts to green or sprout (i.e. the ‘eyes’ start growing), then the amount increases significantly […] [so] A Current guidelines from the NIHrecommends throwing out spoiled potatoes or those that are green below the skin.”
And Solanine is “just the tip of the iceberg when it comes to natural pesticides.” Here are a few others: caffeine, nicotine, capsaicin, DIMBOA[1]. And, as well, all these substances which give flavors to herbs and spices.
“The list is very long. In 1990, Bruce Ames published a paper entitled “Dietary pesticides (99.99 percent all natural)”. In it, he and his coauthors outline that we eat an estimated 1.5 grams of natural pesticides a day, “which is about 10,000 times more” than the amount of synthetic pesticide residues we consume. […] The concentrations of these pesticides are in parts per thousand or parts per million, whereas the amount of synthetic pesticides we find on our food are in the parts per billion range.
[…] Of all the chemicals tested for chronic cancer tests in animals, only 5 percent have been natural pesticides and half of these were carcinogenic.
Think about that for a moment. While there’s an uproar about parts per billion amounts of synthetic pesticide residues on our food, there are more concentrated compounds in fruits and veggies actually known to cause cancer. In addition, some of the more commonly used pesticides in agriculture have mechanisms of action that are specific to the pests their targeting, making them far safer than many natural pesticides”
“This should be a nuanced discussion. Just because an agricultural pesticide has a benign toxic profile does not mean that we shouldn’t try to minimize its use when possible. […] Yet we shouldn’t consider our food to be “unsafe” or shun traditional farming practices because of the use of synthetic pesticides.
Remember: it’s all in the dose.” 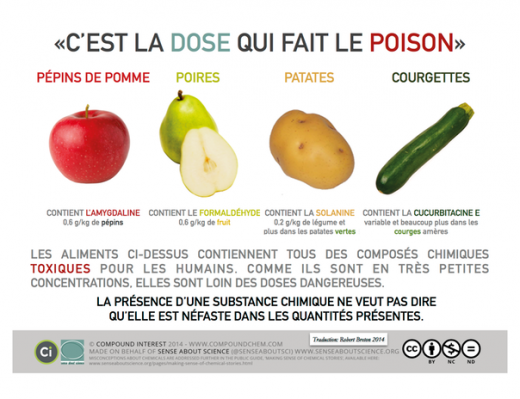